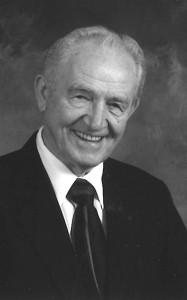 He is survived by his loving wife Mary, of 55 years, and his only son Philip; sister-in-law Helen; niece Susan (Chris) and Godchildren Gabriella & Nicholas; Wanda, sons Adam & Jordan; Brenda (Dwight) children Alexandra & Brandon; the Kolpak and Krajewski families; dear friend Allyn Mills; and extended family across Canada and the U.S.

Antoni was born in Nowolski, Poland. Coerced by circumstances of WWII, his family then moved to Germany. In 1949 he immigrated to Canada with family members, settling near Shaughnessy as a farm labourer. He was later employed in the construction industry, then began his career as a millwright at Ellison’s where he remained faithfully employed for 35 years.

“Uncle Tony” treasured time spent with family, in particular with his son with whom he remained close. He volunteered as an usher at St. Basil’s Parish for many years and was the family’s special cameraman over several decades. He loved travelling across the U.S, and cruising over the Caribbean waters. He generously offered his support and skills as a handyman wherever and whenever needed. He remained as a source of stoic strength to family for many years and always had great “one-liners”; he will be greatly missed by all whose lives he quietly touched. Although he suffered many ailments, he remained positive through it all and continued moving forward without complaint.

The family would like to thank the doctors and staff of unit 46, Special Services at the Calgary Foothills Hospital for the exceptional care they provided.

A Funeral Service will be held at 10:00am on Saturday, October 3, 2015 at OUR LADY OF THE ASSUMPTION CATHOLIC CHURCH, 2405 12 Avenue South, Lethbridge, AB, with Father Kevin Tumback, officiating.