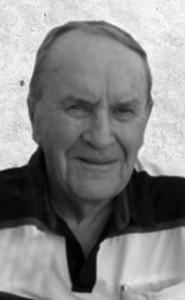 MR. EDWARD ROY TOMLINSON of Lethbridge, passed away peacefully at St. Michael’s Palliative Care Centre on Wednesday September 30, 2015 at the age of 92 years.

Born at Chestwheel Farm, Summerseat, England in 1923. Roy came to Canada with his family in 1925 where they farmed at Halkirk Alberta. Roy joined the Canadian Armed Forces and served until the end of WWII in 1945. He married Daphne Britt in December 1945. They returned to Canada and farmed the Halkirk District from 1945 to 1974. Together they raised five children and then retired to Lethbridge Alberta, where Roy was very successful in real estate sales for 10 years. Roy had many great years golfing as a member of the Lethbridge Golf & Country Club and later Land of Lakes Golf Club. Roy worked out faithfully at the Lethbridge Fitness Club. Roy and Daphne spent many winters in Morro Bay California where they could continue to golf year round. When they no longer went south they took up bowling in the winter. Roy will be greatly missed by all of his family, friends, and neighbors.

As per Roy’s wishes there will not be a funeral service. A private family Interment in the Tomlinson family plot at the Omega Cemetery, Gadsby, AB. will be held at a later date.

Special thanks to all the St. Michael’s Palliative Care Staff for the wonderful care they provided to Dad.