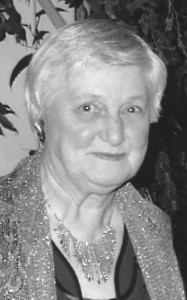 On Thursday, October 8, 2015, at 84 years of age, the Lord took into his eternal glory Eve Hulst, beloved wife of the late Evert Hulst, and loving mother of John and his wife Marianne of Kenilworth, Ontario, Wilma and her husband Jack of Aldergrove, British Columbia, Kathleen and Pierre Gagnon of Calgary, Alberta and Peter and his wife Angela from Coaldale, Alberta as well as 18 grandchildren and 18 great-grandchildren.

Eve was born in Enschede, The Netherlands on January 9, 1931. She immigrated to Canada in 1959 where she began work as a nurse. She was married to Evert on October 6, 1962 and shortly thereafter they began farming in Belwood, ON. From there they moved with their four children to Homewood, MB where they farmed until moving to Enchant, AB. Several years later they purchased a farm north of Coaldale and remained there until retirement when they moved into town. In June of 2007 they moved to Arthur, ON where Eve became widowed at the age of 76. After living there for 4 years, she made the decision to move back to Alberta where she lived until her passing.

A big thankyou to the staff at the Coaldale Health Care Centre for the wonderful care and compassion they’ve shown to mom and the family.

A Funeral Service will be held at 10:00am on Saturday, October 10, 2015 at the COALDALE CANADIAN REFORMED CHURCH, Hwy #3, Coaldale, Alberta, with Pastor Tyler Vandergaag, officiating. Interment to take place at a later date in the Greenwood Cemetery in Orangeville, Ontario.