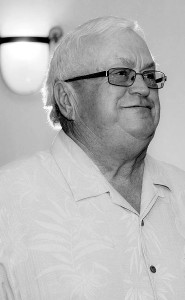 David Michael Hubka passed away peacefully with his wife and children by his side in Calgary, Alberta on October 11, 2015. Left to grieve his loss and honour his memory are his wife Connie of 48 years and their 4 children – son Ian (Bev) Godfrey and their daughters Kate and Emily; son Darren Hubka (Sally) and their children Kyla (Gerrit), Lane, Morgan and Madelaine; son Todd (Chandra) and their children Kelsey (Joel), Treyd and Ty; and daughter Kelly Tibbets (Brian) and their daughters Reese and Rowan. Dave is also survived by his sisters Lois Greene, Joanne (Harold) Cutforth and Dorothy Ganger as well as numerous nieces and nephews. He was pre-deceased by his parents John and Margaret Hubka, brothers-in-law Lloyd Greene and Steve Ganger as well as nephew Robin Ganger. Dave was an avid lover of agriculture and worked in this industry for his entire life – including a career in fertilizer for nearly 30 years. Always a community and civic minded individual; he dedicated 23 years as a Town Councillor for the Town of Claresholm. Over the years he enjoyed playing slow pitch, curling, camping, fishing and spending time with friends and family. Dave will be well remembered for his friendly smiles and genuine interest of people in his community. Of all his achievements; his proudest was by far his family and he and Connie were known to travel for miles and miles just to catch a ballgame or dance recital for their kids or grandkids. A Celebration of Life will be held at the Carmangay School on Friday, October 16, 2015 at 3:30 pm. Photos, stories and condolences may be shared with Dave’s family through www.choicememorial.com.

In lieu of flowers, it was Dave’s wish that donations be made to Cystic Fibrosis Canada (www.cysticfibrosis.ca).