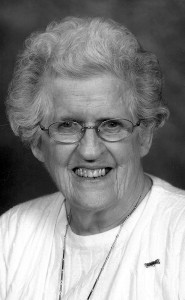 MARGARET DONALDA KING, nee Greer, beloved wife of the late Ralph King, of Lethbridge, passed away at the Fairmont Extendicare, on Monday, October 12th, 2015 at the grand age of 99 years.

Margaret was born in Rosetown, Saskatchewan and moved to Coaldale at the age of two where she received her schooling and lived until her 95th year. It was in Coaldale that she married Ralph and raised their three children. She is survived by her daughter Marilyn Erdmann of Vernon, son Dennis (Dianne) of Lethbridge and son Terry (Judith) of Ottawa. Margaret cherished her 6 grandchildren and 9 great- grandchildren. She was predeceased by her husband Ralph, her parents Roy and Eva Greer, sisters Rhoda (Toots) Holtman and Alma (Babe) Cross, and brother Gordon.

Throughout her lifetime, Margaret’s love of Coaldale was evident by her active involvement in her community. She was a key member of the Coaldale History Book Committee. Marg was a lifelong member of Coaldale United Church’s Eva Greer UCW and Pythian Sisters.

Marg’s interests and creative talents were many. Her china painting, photography skills and hobbies of sewing, knitting, coin and stamp collecting and scrapbooking were all enhanced by her sense of perfectionism.

At home, Marg was a wonderful homemaker; avid fan of her children’s varied interests and accomplishments and she loved each of her grandchildren dearly.

The family would like to extend our thanks to the staff at the Sunny South Lodge in Coaldale and Fairmont Extendicare in Lethbridge whose devoted care enhanced Marg’s quality of life in her declining years.

A Celebration of Life will be held at the COALDALE UNITED CHURCH – 2022 18th Street, Coaldale, Alberta on Friday, October 16th, 2015 at 2:00 P.M. with Pastor Glenda Wert officiating.

A Private Family Interment will be held prior to the Service at the Coaldale Cemetery.

In memory of Margaret, donations may be made to the Coaldale United Church – 2022 18th Street, Coaldale, Alberta T1M 1E9.