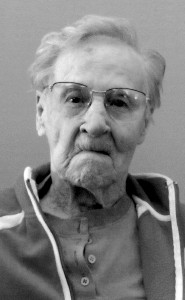 ROSE PISKO (nee Toporiwski), beloved wife of the late Steve Pisko of Lethbridge, passed away peacefully on Monday, October 12 (Thanksgiving Day), 2015 at St. Therese Villa, at the age of 94 years, 4 days short of her 95th birthday.

Rose was born October 16, 1920 and raised in Hardieville. On April 29, 1938 she married Steve. They moved into their home in Lethbridge in 1942, where they raised their children. Rose resided here until she moved to St. Therese Villa in 2009. She worked at Woolworths (downtown) for many years.

She is the last of her family of eight children. Rose loved to garden, crochet, knit, and look after her home. She came from a generation that valued working for what they needed. She was always busy and she was known to be “feisty” at times.

Sincere thanks to the staff of St. Therese Villa for their care and compassion.

The Funeral Service will be held on Friday, October 16, 2015 at 11:00 a.m. at CHRISTENSEN SALMON GENERATIONS FUNERAL HOME, 703-13 Street North, Lethbridge. Viewing will be available one hour prior to the service.