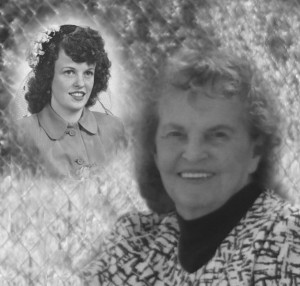 Joyce excelled at a variety of crafts, whether it was hand sewing 1000 sequins on a dance outfit, making Halloween costumes that won first prize, creating stained glass gifts for her family or stitching intricate beaded angels.

Moving often as a Navy and Air Force wife, she enjoyed meeting new people and made many friends on both sides of the border. Joyce’s career started at BC Hydro as the youngest bookkeeper, and continued as Manager of Sarber’s Ladies Wear in Moose Jaw, SK and later at the Treasury Branch in Taber. Following her retirement, she enjoyed exploring in the motorhome, winters in Arizona and her lucky trips to Vegas.

She is survived by her husband of 65 years, Bill Lord, also of Lethbridge, her children, Sharon (Jerry) Lagace of Boston, Bob (Sheila) Lord of Salmon Arm and Debbie (JD) Moore of Lewiston, MT. She is also survived by her angels, her grandchildren Carrie & Josh, Tracie & John, Shaun, Chad & Caroline, Lindsay & Jon, Amanda, Jaime & Wade and Corey and her 11 great grandchildren. She was predeceased by her parents and her sister Marjorie.

A service celebrating her life will take place at 2:00 pm on Friday, October 23, 2015 at MARTIN BROTHERS RIVERVIEW CHAPEL, 610-4 Street South.

The family requests no flowers, and asks instead that donations be made to the Alzheimer Society (#402 740 4 Ave. S., Lethbridge, AB T1J 0N9) or the charity of your choice.

Thank you to the staff of 5B at the Chinook Regional Hospital and the Sunny South Lodge in Coaldale for the kindness shown to Joyce and her family during her short struggle with Alzheimer’s.