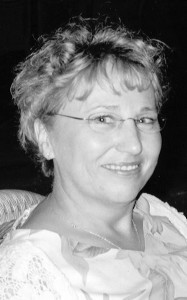 Sherry Sinnott (born Sherry-Lyn McClain), wife of Les Sinnott, passed away on Wednesday October 21, 2015 in the Foothills Hospital at the age of 63. She was born on June 5, 1952 to Glen and Edna McClain.

Besides her husband Les, she is survived by her two sons Dwayne Sinnott of Lethbridge, Brad Sinnott (Lisa) and their children Evan and Avery of Calgary, her brother’s, Merle McClain of Lethbridge, Doug McClain of Pincher Creek, and a sister, Corinne Cyr of Pincher Creek. She is also survived by numerous sisters-in law, brothers-in law, nieces and nephews.

Sherry was predeceased by her parents Edna, and Glen McClain, two brothers Thomas, and Derryl McClain, a bother-in law Maurice Cyr as well as her in-laws Ernest and Isabelle Sinnott.

She had a gift for sewing and painting and she loved being around her children and Grandchildren.

The Memorial Service will be held at St. Michael’s Catholic Church (958 Christie Avenue, Pincher Creek) on Wednesday, October 28, 2015 at 1:00 p.m., interment to follow in Fairview Cemetery.

In lieu of flowers, those who wish they may donate to the Heart and Stroke Foundation (.P.O. Box 2211 Lethbridge, Alberta T1J 4K7)

One Condolence for “SINNOTT Sherry-Lyn”