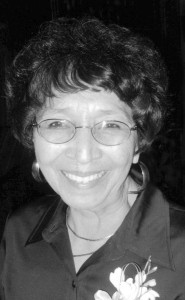 It is with great love and heavy hearts that we announce the passing of our dear Mother, ANNIE MAE GOODSTRIKER, who left to be with the love of her life James on October 20, 2015 at the age of 71 years. Annie Mae was born to Pete and Susan Provost on February 23, 1944 in Yakima, Washington. She received her education at the Sacred Heart Residential School in Brocket, Alberta. She completed her Building Service Workers Course – Grade 10. From 1958-59 mom worked as a Short Order Cook at The Java Shop in Fort Macleod. She had learned in her younger years to be a hard worker, when she was employed as a Nanny/House Keeper in Calgary. In 1977-79 Annie was a Cooks Assistant at St. Mary’s Residential School. In 1979-92 She was a housekeeper at Cardston General / Auxiliary Hospital. She started her employment in 1992-98 with the Blood Tribe Department of Health as a Housekeeper, Thereafter she was promoted to Supervisor for the Housekeeping Department. At this time she retired due to health reasons. In her last years of employment with the Department of Health it was where she had formed many valued friendships that lasted a life time. It was this work ethic that she had instilled with all her children, family and friends. The Provost family were ranchers and farmers and also active members of the Black Horse Society and Fast Horse Society. The family hosted an Annual River Side Rodeo that became a historical event each year. Annie Mae was also a member of the Big Bull Clan and who were very active in the ceremonies and keepers of Sacred Beaver Bundles and Blackfoot Lodge Bundle as well as performing in traditional dancing. On November 19, 1966, Annie Mae married the love of her life James and between the both of them they raised their family. We remember Dad saying that he was born on a cold day in December and married Mom on a cold day in November. Dad had a photography business and the both of them enjoyed travelling to many rodeos throughout Canada and the U.S and made many long lasting friendships throughout the rodeo circuit. They also were very active with the various sporting events throughout Indian Country and she had the privilege of travelling with James to Japan, Hawaii, Ireland and England when he as Professional Photographer / Journalist who reported and covered the Warriors Basketball team for the Kainai News, Canada’s Number 1 Newspaper. Annie Mae’s good friends Evelyn Good Striker, Caen Bly and Lillian Fox had all taught her to golf, where she accomplished and was very proud of her Hole in one at the Fort Macleod Golf Course. She was all around Sports Mom who attended Ron and Darrell’s numerous sporting activities. At one time she had to step behind the bench and coach Darrell’s Pee-Wee Hockey Team, as well as stepping in behind the plate to call and strikes for one of Darrell’s Baseball games where she really stepped up to the plate! Mom always said she was Dad’s banker, accountant, sales woman, and chauffeur, but most of all she was the back bone to Dad’s Photography Business. She was very supportive to the traditional way of life where she attended Bundle Opening ceremonies, Sweat Lodges and showed her support at the Sacred Horn Society Sundance.

Annie Mae enjoyed playing bingo, storytelling, visiting on the phone, reading, watching her favourite soap operas, watching and cheering on her Calgary Flames and most of all she enjoyed her “Du Maurier Special Mild King size”. She was a very loving and caring person and made numerous friends throughout all walks of life. One of our last family trips with Annie Mae was to Arlee, Montana this past summer to attend a Sweat Lodge for prayers and healing. We had made a slight detour to stop at the Arlee Pow wow to get her an Indian Taco.

In 1985 James and Annie Mae took on the role of raising their Kipitapoka, Lacey Heavy Head. Raising a grandchild was a norm in the traditional way of life to the Blackfoot People. On June 26, 2014, Grandson Lennon “Lemons” Stanley Ryker Day Rider was born and became the New Man in her life. She never thought another man would come into her life until “Lemons” was born and stole her heart until her passing.

One Condolence for “GOODSTRIKER Annie”