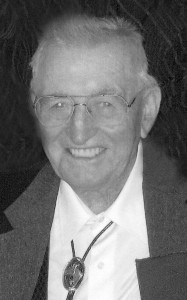 JOHN JOSEPH (JACK) SIMPSON, beloved husband of the late Eileen Simpson, passed away Friday, October 30, 2015 at the age of 95 years surrounded by his family.

John was predeceased by, his parents John and Margaret, his brothers Leo and Eddie, and his sisters Catherine, Marge and Isabelle.

John spent his early life in Vancouver until his family relocated to the Pincher Creek area. He was kept busy working on the family farm. In April 1941, John was deployed overseas and served in the First Armed Brigade R.C.E.M.E and held the rank of Craftsman.

During some time spent in England, John met the love of his life Eileen O’Sullivan. When the war ended in 1945, John made the move back to Southern Alberta with Eileen and their infant son John. Not long after they were settled, they were blessed with another child, daughter Margaret. While the kids were young, John ranched and farmed in the Pincher Creek and Lethbridge area. Eventually, John and Eileen moved the family to Lethbridge, and in 1960 he began a 25 year career as a postal carrier with Canada Post until his retirement in 1985.

John was an avid outdoorsmen – he loved fishing and camping, especially sitting around the campfire. He loved being surrounded by family and friends and never turned down a good game of cribbage or a round of darts. He was more than happy to welcome visitors and was quick to offer a drink – dark rum and coke was his favorite.

John was much loved and will be missed by many. He didn’t leave this world without imparting on his friends and family the importance of enjoying the simple pleasures in life – a roaring campfire, a good story, or a funny joke. But most importantly, he knew the value of family and was always there when needed.