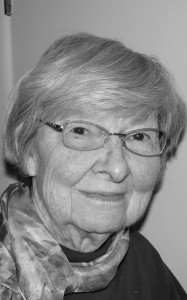 Katharine Lois Russell UE, of Lethbridge, beloved wife of Frank A. Russell, passed away peacefully at Chinook Regional Hospital on November 1, 2015 at the age of 85 years.

Born June 9, 1930, the second daughter of William and Beatrice Darker of St. Catherine’s, ON. She attended school in that city, before going to McMaster University (B.A.) and University of Toronto (B.S.W.). She worked as a group social worker at the YWCA in Toronto before marrying Frank Russell, the geologist fiancé she had met at McMaster. After living in Sudbury for two years, they moved with their new daughter to Alberta, where Frank was part of the family farm operation. Katharine continued her community involvement as well as managing a growing family. Her membership to the Cdn.Fedn. Of University Women, Lethbridge Naturalists, YWCA (board member), McKillop United Church, Women of Unifarm (director), and acting as a school environmental education volunteer, indicates the scope of her dedication to the interests and welfare of Lethbridge and Southern Alberta.

Besides her loving husband, Katharine is survived by her daughter Janet (Glenn Miles), her sons Jim (Liza) and Alex (Christine); grandchildren Madeline, Naomi, Jeffry, Thea, Miranda, Meaghan and Daniel; and her sister Elaine Correll of Ottawa. She was predeceased by her parents William and Beatrice Darker.

The family would like to thank the staff of the Chinook Regional Hospital for their care and attention in Katharine’s last days.

Leave a Condolence for Mary Thompson