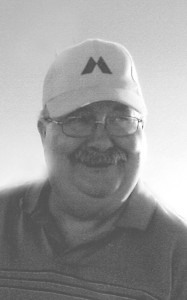 It is with heavy hearts, that the family of Gary Richard Clayton, (Zeek to some) announce his unexpected passing on Sunday, November 1, 2015 at the age of 64 years.

Gary was born in Lethbridge, Alberta, on January 20, 1951 to Norman and Leoen (Butler) Clayton. He grew up in Warner, Alberta surrounded by family and friends.

Gary joined the Navy and was in the service for three years. His brother Gordon and him owned and operated a Trucking business for a time. He worked at Dri-Land Feeders and then the County of Warner and then to Strathmore area as a Grader Operator on the pipeline. He was excellent at what he did.

Gary loved to ride his Harley Davidson, go fishing, hunting, golfing and head down south in the winter. He was a Past Member of the Warner Volunteer Fire Department and B.P.O. Elks.

Gary is survived by his brothers Duane (Pat) Clayton of St. Albert, Gordon (Kathy) Clayton of Warner, sister Donna Williams of Delta, BC, and Laurence Marriott of Vancouver, BC. He will be greatly missed by his nephews Jeff / Janine Clayton (Jozee and Jesse), Corey / Willa Clayton (Connor and Erik), David Marriott and niece Leslie Marriott and all his many friends.

Gary was predeceased by his parents Norman and Leoen Clayton and brother-in-law Dave Williams.

Family would like to give a special Thank You to the Lethbridge Intensive Care Unit nurses, and doctors for his special care. Also to everyone who sent him a text, visited him, or called.

For those who wish, memorial donations may be made in Gary’s memory to the Warner Fire Department, Box 88, Warner, AB, T0K 2L0.