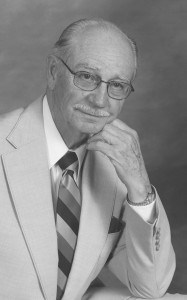 Norman “Norm” Edgar Bullied of Lethbridge, beloved husband of the late Anne Doreen Bullied, passed away at Lethbridge on November 10, 2015 at the age of 92 years.

After graduating Norm joined the Royal Canadian Air Force in 1942, where his passion for flight was ignited. After he was discharged in 1945, he came home to begin his career as a salesman, clerk, and accountant for various firms in Saskatchewan and Alberta, including Perlich Bros. Auction in Lethbridge. In 1958 he founded Reliance Agencies Real Estate and Insurance, which continues today as Schwartz Reliance Insurance.

Over the years Norm served on many committees and boards under many titles such as the #11 Lethbridge Air Cadets Squadron, R.C.A.F 702 Wing, Lethbridge Flying Club, Royal Canadian Legion Gen. Stewart Branch, the Southminster United Church, and many, many others.

He enjoyed camping, gardening, golf, and ice skating but his life-time passion was aviation; accumulating over 2000 hours of flight time. He will be missed.

Besides his loving wife Anne Doreen, he was predeceased by his parents William and Eva, sister Lois, and stepdaughter Judy Erickson.

A Graveside Memorial Service will be held at 2:00PM on Monday, November 16, 2015 at Mountain View Cemetery – Field of Honour, with Rodger Halvorsen officiating.