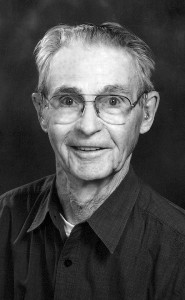 ROBERT (BOB) ARCHIBALD CADY, beloved husband of Margaret Cady of Lethbridge, passed away at the Chinook Regional Hospital on Sunday, October 11, 2015 at the age of 95 years.

Bob served in the Second World War as a Sergeant Major then worked at the Lethbridge Sick’s Brewery for over 35 years as a carpenter and millwright. He also managed the Lethbridge Brewery Credit Union. Bob was very involved with many clubs including the Army and Navy, Legion and Loyal Order of Moose Lodge.

He enjoyed the company of his many friends; playing cards, sticks, dancing, shuffleboard and lawn bowling. Bob was always telling jokes and stories; “The Life of the Party”. He will be fondly remembered by all who knew him.