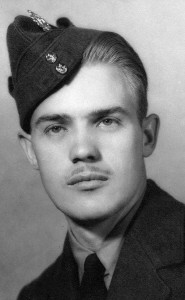 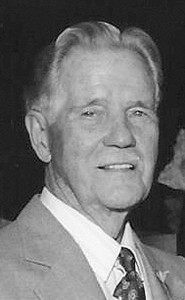 SYLVEN ORR NEILSON was born in Orton, Alberta to Susanna and John Neilson. He is predeceased by his wife Elnora (1987), two brothers and two sisters. Raised in Lethbridge, he attended Galbraith and Westminster Schools and the LCI where he played basketball for the LCI Rams. After graduating, Syl worked for the T. Eaton Company and Tip Top Tailors before joining the R.C.A.F. in 1942. Unable to fly, he became an Air Traffic Controller and was stationed in Whitehorse, NWT for 3 years. He and Elnora were married in Whitehorse in 1944. After the war Syl was employed in the Western Headquarters office of Trans Canada Airlines in Lethbridge. Later, he and Elnora moved to Rossland, BC where he entered the dry cleaning business.

Returning to Lethbridge he opened Neilson’s Dry Cleaners on 9th Avenue South and later Parks-Neilson Dry Cleaners in downtown Lethbridge. Through the years he has been a member of the Elks, Kiwanis, Green Acres, Gyro, Army, Navy and Air Force and 702 Wing.

He is loved and will be missed by: daughter Sandra Thirlwell, sons Wayne (Carol) and Larry (Mary Jane) and grandchildren Jennifer, Jeffrey, Megan, Jaime and Marra as well as 6 great-grandchildren. He was known by several names: Syl, Sly, and GG. He was instrumental in encouraging and supporting his children’s activities at the YMCA and could be found at the baseball diamond or hockey rink in Lethbridge and throughout Central and Southern Alberta. He loved camping and picnics at St. Mary’s reservoir, fishing, hunting, his horses, and was an avid gardener and golfer. He loved to tease and had a keen sense of humour up to his death.

The family sincerely thanks the staff at Raymond Hospital for their care and compassion shown to Dad and family.

A family service will be held at a later date.

If friends so desire, memorial tributes may be made to the charity of one’s choice.