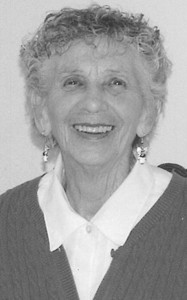 Myrtle Wesgate, beloved wife of the late William Wesgate, passed away peacefully surrounded by family at Lethbridge, Alberta on November 11, 2015 at the age of 94 years.

Myrtle was born at St. Claude, Manitoba. Her family later moved to Hood, Manitoba and she attended school there. After completing her education Myrtle moved to Winnipeg where she was employed by Great West Life Insurance.

On New Year’s Day, 1951, Myrtle married William Wesgate and became a farmer’s wife on the homestead at Portage la Prairie, Manitoba. They had one daughter, Ardelle, and were wonderful parents. While she loved the farm life, Myrtle also enjoyed many other fulfilling activities including Ladies Aid, Royal Purple, Parliamentary Procedure, Portage la Prairie Chamber of Commerce, and Toastmistress where she won several speech contests. Myrtle was employed for many years at the Portage Credit Union.

A Funeral Memorial Service will be held in Portage la Prairie in 2016.