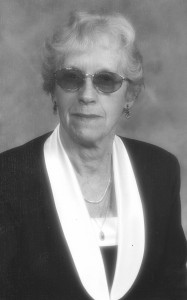 The family and dear friends of Gepke Slomp (nee Koops) are saddened to announce that, on the evening of November 22, 2015 in Lethbridge, Alberta, Gepke went to be with her Lord and Saviour. She was just shy of her 94th birthday.

Gepke was born in the Smilde, Netherlands on November 28, 1921. She immigrated to Canada to marry Tim Slomp in Iron Springs, Alberta in 1949. They worked together on their farm in Coaldale until Tim’s passing in 1983. Gepke remained on the farm renting out her land until, after 62 years, she moved to Lethbridge in 2011. Gepke lived a contented life, by the grace of God. She enjoyed her evenings with her friends, playing games and socializing. She was a determined and hardworking woman, devoted to her Lord and her church.

The family of Gepke would like to extend a sincere thank you to the staff at Black Rock Terrace Senior’s Home, Alberta Ambulance Services, Chinook Regional Hospital Emergency Department. Special thanks to the Doctors and the nursing staff in ICU for their wonderful care during her short stay. We would also like to extend a special thank you to Riet Scheffer and Gerrit Van Dewal for their loving devotion to Gepke over the past years.

Family and Friends are invited to pay their respects at 11:30am on Saturday, November 28, 2015 at the MARTIN BROTHERS RIVERVIEW CHAPEL, 610 4 St. S., Lethbridge, AB. Interment will follow in the Mountain View Cemetery.

In lieu of flowers, Memorial Donations may be made to a charity of your choice.