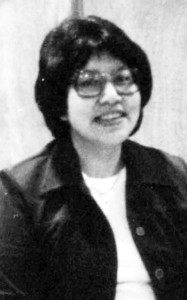 Louise was raised in the Levern community, and attended St. Mary’s Residential School, graduating in 1964. She greatly admired the nuns at the school, so she joined religious life with the Sisters of the Child Jesus in September 1964. Louise made her first vows in 1967. During her time with the Sisters she was stationed in North Vancouver BC, North Battleford SK, and Sechelt BC. She left the Sisters after the death of her mother Sarah in 1970. Louise attended Lethbridge College and the University of Lethbridge to explore her interests in Administrative Assistance, Social Work, and the Fine Arts. Louise worked as a Social Worker on the Blood Reserve and Lethbridge AB. She was an artist, and worked with paints in creating many different works of art.

Louise met the love of her life, Henry; together they shared their world with each other, and were married in 1977. She helped Henry with the family business as his secretary and go-for. Together they raised their wonderful daughter Flora, and were very proud of her life and academic accomplishments. Louise was known for her strong faith which helped her through difficult times, and was often asked for her prayers. Due to illness, she was confined to a wheelchair later in life. She was a sweet, kind, and loving person. Louise was dearly loved and will be greatly missed.