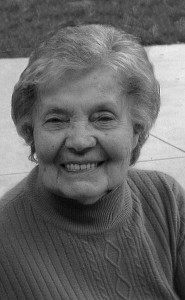 Anne Mary Dickout of Lethbridge, beloved wife of the late Mr. Stuart Dickout, passed away peacefully at Extendicare Fairmont Park on Sunday, December 6, 2015 at the age of 91 years. Anne was born on August 20, 1924 in Puspoki, Kerestes, Hungary. She was the first child of Andrew and Emerencz Kish. In 1930, mom, along with her parents and brother Andy, immigrated to Canada. Mom graduated from Normal School and became a teacher. She taught at many schools and enriched the lives of many of her students. She met the love of her life, Stuart Dickout, at a church social in Picture Butte. They were married in 1953. The births of Randy, Joy & Gloria completed this happy family. Our family moved around to various towns and cities, but wherever we roamed, Enchant always felt like home. Mom and dad bought the General Store and planted deep roots within this community. In 2000, Mom and dad retired to Lethbridge. In 2013, they moved to Alberta Rose Lodge, and after dad’s passing in January 2015, mom moved to Extendicare Fairmont Park to live out the last months of her life. Anne is survived by her son Randy; her two daughters Joy Gillard and her sons Cole and Cody, and Gloria (Norm) Elaschuk and their daughter Anndie; sister Veronica Forbes; sisters-in-law Lorraine Kish, Marilyn Kish and Janet Dickout. Besides her loving husband Stuart, Ann was predeceased by her parents Andrew and Emerencz Kish; brothers Andy Kish and John Kish; brothers and sisters-in-law Elmer & Bernice Dickout, Clarence Dickout and Audrey Hadford. Family and friends are invited to pay their respects between 12:00pm – 12:30pm on Thursday, December 10, 2015 at EVANGELICAL FREE CHURCH OF LETHBRIDGE, 4717 24 Ave. S., Lethbridge, AB. A Graveside service will be held at 1:00pm on Thursday, December 10, 2015 at Archmount Cemetery. A Funeral Service will be held at 2:00pm on Thursday, December 10, 2015 at EVANGELICAL FREE CHURCH OF LETHBRIDGE, 4717 24 Ave. S., Lethbridge, AB with Pastor Jeff Frostad, officiating. Those who wish may make memorial donations to the Southern Alberta Bible Camp, PO Box 99 Lomond, AB, T0L 1G0