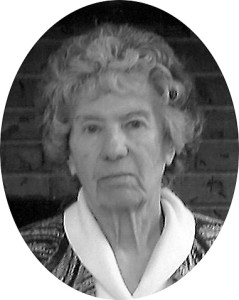 It is with profound sadness that we announce the passing of CAROL PIKE, much loved wife, mother and grandmother on Tuesday, December 8, 2015 at the age of 87 years.

Carol (Valgardson) was born and raised in Taber, Alberta. She was raised there until she met and later married Ivan Pike on October 6, 1951.

Carol and Ivan moved to Nobleford where they lovingly raised three children. Carol enjoyed coffee with her friends and she was actively involved with the Ladies Auxillery.

In 1999, Carol moved to Lethbridge to assist in the care of Ivan. She resided in Parkbridge Estates, where she enjoyed the company of many good friends.

Along with her husband Ivan, she was predeceased by her siblings; Walter, Onie, Esther, Mildred, Leo and Margie.

In memory of Carol, donations may be made to the Royal Canadian Legion Poppy Fund, 324 Mayor Magrath Drive South, Lethbridge, AB., T1J 3L7