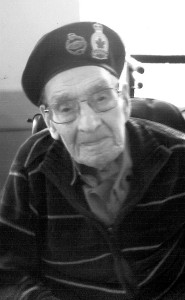 Ernest Aubrey Stanton of Lethbridge, beloved husband of the late Irene Stanton (nee Beeson), passed away peacefully at St. Michaels on December 5, 2015 at the age of 96 years. Stan was born in Mexborough, Yorkshire, England on May 6, 1919. He was the only child of Ernest and Lillian. Starting work at the age of 13 as a butcher boy he had many jobs throughout his life; he was a coalminer, owned his own milk business, and worked as a postmaster and shop keeper just to name a few. He joined the Royal Tank Regiment in 1937 and saw action in Dunkirk, Egypt, Libya and Greece where he was captured by the Germans in 1942. He was a prisoner of war in Poland and Germany, making three unsuccessful attempts to escape, but survived to get married to Irene and had one daughter, Lynn. Stan and Irene immigrated to Canada to be with Lynn and her husband John in 1986, enjoying many holidays with them and their children, Richard and Caroline. For the last three years Stan was a resident of St. Mikes and he enjoyed good care and love from all the staff. Stan is survived by his daughter Lynn and son-in-law John, as well as his grandchildren; Richard and partner Erika of Calgary, Caroline and husband Todd of Sundre. Cremation has been entrusted to Martin Brothers. In lieu of flowers, a donation in Stan’s name may be made to your favorite charity.