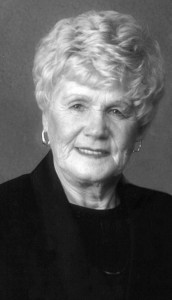 Mary Wall of Lethbridge, Alberta, beloved wife of the late George C. Wall, passed away peacefully surrounded by her family at the Chinook Regional Hospital on December 9, 2015 at the age of 86 years. Mary was born on April 30, 1929 in Silberfeld, Siberia. As an infant she and her family fled communism and made their way to Kabul, Afghanistan where they lived for twelve years. At the start of WWII they were forced to leave Afghanistan for Germany eventually immigrating to Canada at the age of twenty. Mary treasured her family and truly enjoyed the times spent together celebrating. She was a hard working farm wife who spent many hours in her beautiful flower and vegetable gardens. She was an excellent baker and cook with a gift of hospitality. Mary was a member of the Coaldale Mennonite Church and served faithfully in the Sunbeam Sewing Circle. She enjoyed her many memorable trips with her husband George. Mary is survived by children; Herb (Kristine), Eleanor Willms, Gord (Connie), Les (Lisa) and daughter-in-law Denise Wall (Rob Rittenberg). Also left behind to mourn her are her fifteen grandchildren; Andrew (Melissa) Wall, Ainsley (Spencer) Croil, Avery Wall, Jennifer (Rob) Tanguay, Mark (Jessica) Willms, Brian (Caitlin McCredie) Willms, Kathryn (Tanner Clements) Willms, Emily (Rob) Reid, Jesse (Dave) Fowlis, Murray Wall, Lynette Wall, Jeremy (Brittany McNabb) Wall, Alyssa Wall, Celia (Tanner) Granberg, Karleen (Jared) Clark and ten great-grandchildren. Mary is predeceased by her husband George Wall on September 9, 2015, her son Bob Wall and son-in-law Jake Willms. She will be forever missed. Family and friends are invited to pay their respects between 7:00pm and 8:00pm, on Sunday, December 13, 2015 at MARTIN BROTHERS RIVERVIEW CHAPEL, 610-4th Street S. Lethbridge. A Funeral Service will be held at 11:00am, on Monday, December 14, 2015 at the COALDALE MENNONITE CHURCH, 2315-17th Street, Coaldale, AB, with Pastor Lil Thompson and George Klassen officiating. In lieu of flowers, memorial donations may be made in Mary’s name to the MCC Alberta. Cheques may be mailed to MCC Alberta, 210, 2946 – 32 Street NE, Calgary, Alberta, T1Y 6J7.