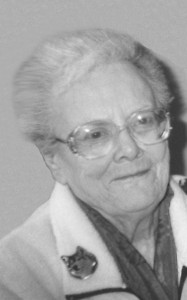 Mrs. Margaret Ann Baron of Milk River (formerly of Warner) passed away at the Milk River hospital on Monday, December 14, 2015 at the age of 94 years.

Margaret was born in Lethbridge on August 29, 1921 where she subsequently was raised on the family farm east of Warner by her parents Beattie and Edith Lillie. As an adolescent and into her teen years she attended Lillieview School out east of Warner until she reached grade 12 where she then finished her schooling and graduated in Milk River while staying with some good and longtime family friends, the Madge family.

Shortly after finishing her studies in Milk River, Margaret attended a business school in Lethbridge where she met her future husband and the man she would start her family with; William Baron, a British Royal Air Force Pilot stationed in the city training pilots for the War overseas. After a brief courting, which included the occasional RAF dance with company of many friends, they married on June 19, 1943. A little time passed after the honeymoon when Bill had to return to England to do his part in the War and his Bride followed him on a convoy ship as soon as she could. They lived in Oldham, Lancashire in the heart of England where they met many lifelong friends, most especially Edie Waterworth, who she continued sharing letters with right up until the end. During their time in Lancashire they had their first child, Beverley, who was born just a few days before the Allied Forces Triumphs on D-Day.

After the War, they returned to Warner with their new child and began their lives in farming. They settled down on a piece of land just south of town and tilled and cared for the land well enough for three more children to be brought up in their care and nurturing.

After Bill passed in the spring of 1979, Margaret moved to Lethbridge where she resided until 2005. During much of her time in Lethbridge she was happy to have Chester Stroman as her companion for many great years until his passing. That year Margaret moved back to Milk River to live with her oldest daughter Beverley and for a time afterwards, her daughter Paula and son-in-law Bill.

Those who knew Margaret, understood that there was a certain expectancy of hearing any sort of out this world comment at anytime, a woman who was never afraid to have an option and just say what she thought was appropriate at the time, regardless of whether others would agree with her judgment of what was considered appropriate. Almost everyone seems to wholeheartedly agree that she was truly one of a kind. Full of life, always enjoyed a good joke or water fight, and most especially she loved and cared for her family. She was very close with every member, and really taught her Grandchildren the true meaning of a ‘Grandmothers Touch’.

She was predeceased by her parents Beattie and Edith Lillie; three brothers and one sister; son-in-law Gordon Balog; companion Chester Stroman; and her husband William Baron.

The family would like to especially thank the caretakers at Prairie Rose Lodge and the Milk River Hospital for the good care and comfort they provided Margaret in her final years.