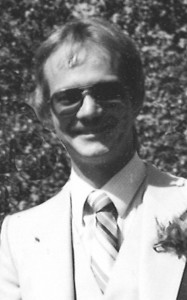 Gary Douglas Buckland passed away peacefully at Lethbridge Regional Hospital on Sunday, December 13, 2015 from pneumonia, following a lengthy illness. Gary is survived by his sons, Stephen and David Buckland; their mother, Jacky Hall-Buckland; his brothers Don and Lorne Buckland and his sister Julia Gaye Sjoberg. He was predeceased by his parents, Helen (Hewson) and Richard Buckland.

Gary was born in Calgary on May 31, 1956 and finished high school there in 1974. After his mother passed away in the fall of 1974, he helped hold the family together and worked at CP Rail. After making a bet with a close family friend, he returned to school and obtained his BSc and MSc in agriculture from the University of Alberta. Gary started work as a Drainage Specialist with Alberta Agriculture in Lethbridge in 1982 and worked there in various capacities until he suffered a stroke in May 2000. His illness prevented him from completing his PhD at the University of Saskatchewan.

Gary was a kind, compassionate, loving and generous man who was dedicated to his family and to his work as a research scientist with Alberta Agriculture until his illness took him away from us. He loved to tease (especially his sister & nieces) and had a quick wit, always making us laugh. He was a wonderful skier (both downhill & water) and loved to play cards (remember those long nights of competitive hearts and cribbage at the cabin). He will be missed.

Special thanks to Gordon, Chad and Kari for their kindness in caring for Gary over the past few weeks.

A Memorial Service will be held at 10:30 am on Tuesday, December 22, 2015 at ST. AUGUSTINE’S ANGLICAN CHURCH, 411-11 St. S., Lethbridge, AB, with Canon James Robinson, officiating. Please don’t send flowers, but please DO send memories for sharing.