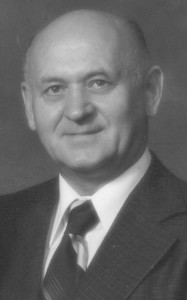 He is also survived by his brother, Stan (Deanna); sisters Stephanie, Margaret (Frank), as well as many nieces & nephews.

John came to Coleman, AB from Lieske, Czechoslovakia with his mother, brother & sister at the age of 12. Dad met & married Mom in 1944, lived in Coleman and worked in the McGillvery Mine till they moved to Lethbridge in 1957 where they opened a family business and worked together for 20 years until their retirement.

Dad has lived in St. Therese Villa for the past two years with wonderful care and compassion during his residency. The family would like to thank all of those who provided Dad with this wonderful care.

Thank you to the Catholic Women’s League for the lunch that has been provided.

A Funeral Mass will be celebrated at 10:00am, on Tuesday, December 29, 2015, at OUR LADY OF THE ASSUMPTION CATHOLIC CHURCH, 2405 – 12 Ave South, Lethbridge, with Father Kevin Tumback officiating. Interment to follow in Mountain View Cemetery.