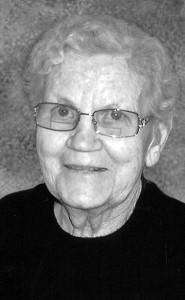 MARY HUBERT of Coaldale, AB., beloved wife of the late David Hubert, went to her heavenly home on Wednesday, January 6, 2016, at the age of 88 years and one week. She will be very much missed by her children John (Dorothy) Hubert of Coaldale, Linda (Mel) Funk of Baytree, AB., Frank (Elfrieda) Hubert and Alvin (Janet) Hubert of Bonanza, AB., and Leona Bartel of Lethbridge, 19 grandchildren plus their spouses, 26 great grandchildren, as well as brothers John (Luella) Siebert of Airdrie, Henry (Anne) Siebert of Coaldale, sisters Sue Siebert of Lethbridge, Nettie Davidson of Calgary, Lydia (Steve) Cullum of Three Hills, sisters-in-law Anne Siebert and Elsie Siebert both of Abbotsford, B.C., brothers-in-law Richard Schultz of Lethbridge and Norris Kirk of Three Hills and numerous nieces, nephews and friends.

Mary Hubert was born in Coaldale, AB. on December 29, 1927, the third of 12 children born to Peter and Susanna Siebert, and their second child born in Canada after her parents and one younger brother immigrated to Canada from the former Soviet Union.

Mary grew up on the farm north of Coaldale and learned the many tasks required of a farm family. She attended school to grade 8 in Coaldale. She also received several years of Bible School training at the Coaldale Mennonite Brethren Bible School. She was baptized upon the confession of her faith on August 11, 1946, joining the Coaldale Mennonite Brethren Church where she remained a lifelong member, participating in choirs and ladies clubs. Mary and David met through participation in the church choir, with their romance leading to marriage on April 11, 1948. Together they farmed in the Coaldale area, raising their family of 5 children. Mary and David enjoyed the farming way of life as evidenced by their keen interest of all seasons of the year, and the various stages of life on the farm. Eventually, 4 of their 5 children also took up farming as a way of life. Mary and David retired to the Town of Coaldale in 1979, continuing to show their interest in the farm, often visiting their children daily.

In February, 1995, David suffered a serious, debilitating stroke which robbed him of his mobility and independence, resulting in his taking up residence in the Coaldale Health Care Centre. Here Mary faithfully visited him on a daily basis until his passing in 2003. Mary took up residence in the Coaldale Sunny South Lodge in July, 2009, where she continued to reside until her hospitalization in October, 2015.

We remember Mom as a dedicated, conscientious, fun-loving mother, grandmother and great grandmother, and mentor who was totally devoted to Dad and her children. She was very concerned with the physical, emotional and spiritual well being of her family. Mom carefully tended a large garden each year, her goal being to freeze enough produce to enjoy for an entire year. Traveling to Creston each year was enjoyable for the family, but it also meant we could look forward to the delicious variety of canned fruits and jams throughout the cold winter months. In Mom’s world, water was not just used for cooking, cleaning and irrigation, but also for water fights, fishing, swimming and waterslides. Mom was always content when her family was by her side. Mom took great pride in the accomplishments and interests of all her children and grandchildren, traveling many kilometers to celebrate milestone events such as choral presentations and graduations. We are left with many fond memories and are thankful for the example we have to follow. As a family we are thankful for your presence and support at this time of sorrow, but also of joy.

A Graveside Service will be held at the COALDALE MENNONITE CEMETERY – Coaldale, Alberta, on Wednesday, January 13th, 2016 at 10:00 A.M. with Pastor Gary Burke officiating.

One Condolence for “HUBERT Mary”

Leave a Condolence for Linda Holden