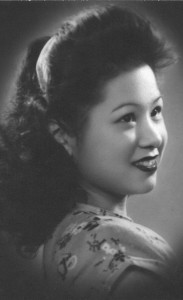 Esther (Kwai Shin) How (nee Yue) passed away peacefully on Saturday, January 16, 2016. Esther was born, raised, and educated in Hong Kong. After post-secondary training, she taught physical education at the elementary and high school levels and went on to work in an administrative capacity for the Ministry of Health in Hong Kong. She met and married her husband, Roy How, in 1950 during his extended stay in Hong Kong. Following their marriage, they moved to Taber, Alberta, Roy’s home town. The resulting cultural, economic, and geographical shift presented significant challenges but Esther’s indomitable spirit rose magnificently to meet them. Importantly, her commitment to God gave her strength and security in joyful and troublesome times. Esther had a strong faith in God’s goodness and His divine intervention in her life, and enthusiastically shared this with those whose lives she touched. After Esther and Roy moved to Lethbridge in 1977, the congregation at Park Meadows Baptist became a community that was an ever constant support in her devotion to God.

Esther was a devoted wife to Roy, and they journeyed over 40 years together through good times and bad, particularly in his last years when he faced numerous medical crises. Esther’s greatest joy was her four children, Angela, Rachel, Benjamin (Sandra), and Jennifer, of whom she was very proud. She was a fiercely dedicated mom willing to sacrifice all to promote their health, welfare, and future success. Her grandchildren were also a source of great pride and she supported and championed each one of them.

In addition to her involvement with her family, Esther enjoyed several other interests. Esther and Roy travelled extensively across the globe, which left her with many memorable experiences. Esther had a flair for artistic creativity and throughout her life dabbled in various art forms, creating original and unique projects.

In her fifties, Esther discovered a passion for traditional Chinese black ink and watercolour painting. Her talent was immediately obvious and a number of her paintings were purchased by the Lethbridge Regional Hospital, the Cross Cancer Institute in Edmonton, and numerous private collectors. She was especially honoured and thrilled that the Alberta Art Foundation chose to purchase one of her paintings for their collection. Her family was and still is extremely proud of her talent and the commitment she demonstrated to developing herself as an artist.

Esther was predeceased by her husband Roy and an infant son Jonathan. She is survived by her loving children and six grandchildren, Laura, Aaron, Nathan, Linnae, David and Lindsay. Mom will be deeply missed by her entire family, but they are comforted by the fact she is now at peace in the loving arms of God.

Esther’s family wishes to thank the nursing staff and the hospitalists at the Chinook Regional Hospital for their compassionate and expert care. They also wish to thank Greystoke Home Health for their services which allowed Esther to be cared for at home until her last months of life. Finally, they wish to thank Dr. Mona Cassis, her family doctor, for her many years of care.

In lieu of flowers, a donation in memory of Esther can be made to the Billy Graham Evangelistic Association.

One Condolence for “HOW Esther”