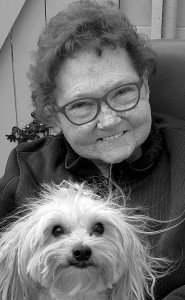 Sharon Elaine Treber, beloved wife of Bill Treber passed away at LRH on January 15, 2016 at the age of 65. Sharon was born in the Galt hospital in Lethbridge to Stella and Joseph Grismer. She was predeceased by both her parents and her brother Kelly Douglas Grismer. She is survived by her husband Bill. She attended Winston Churchill High School and after graduation worked in the banking field for a number of years. She rose through the ranks, and transferred to Calgary for management training, but found she did not like the city living. Sharon was an avid skier, and her family had a cabin they called the Shack at Beaver Mines near Westcastle. She left Calgary and lived at the Shack and worked in Pincher Creek doing park maintenance, then worked at the ski hill in various positions. She moved back to Lethbridge and worked for the City of Lethbridge in the Parks department. She was very proud of her involvement in the Urban Parks project, developing the parks and trail systems in Lethbridge. When the parks project ended, she went to the City’s Out of School program. In 1996 her health problems forced her to leave work. Sharon volunteered on the Canadian Ski Patrol for many years at Westcastle. This was part of her lifelong desire to help other people. She skied from 1970 to the mid 80’s. Again her health forced her to give up skiing. She loved flowers and together with Bill, maintained their yard as their private park. She also loved pets and animals, and is sadly missed by her dog Mattie and cat Boogie. Winter bird feeding was standard and Shar would remind Bill to “feed our birds”. She became wheelchair bound in 2010, and as soon as she was able, was out and about town on her red power chair. She loved to shop and go to Starbucks and Chapters for a coffee break. She inspired everyone she met with her indomitable spirit, sense of humour and cheerfulness despite her life-long battle with Scleroderma. Sharon was most appreciative of the help she received from so many compassionate home care workers and other medical personnel over the years. Sharon loved flowers, but would also appreciate if donations were made to the Scleroderma Society of Canada. The Funeral Service will be held on Saturday, January 23, 2016 at 2:00 p.m. at CHRISTENSEN SALMON GENERATIONS FUNERAL HOME, 703-13 Street North, Lethbridge, with Reverend Canon Erin Phillips officiating. A viewing will be held prior to the service from 1:00 to 1:45 p.m.

Leave a Condolence for Bob and Sheila Lord