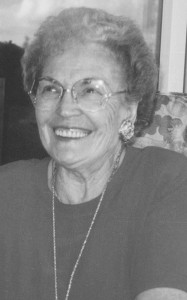 REATHA ADA WALBURGER STODDARD, beloved wife of the late Ray Stoddard, passed away on January 22, 2016 at Good Samaritans in Magrath, AB. where she has resided for the last 6 years.

Reatha is survived by her three children, Raeola (Baker), Randy and Wade Stoddard; 11 grandchildren; and 18 great grandchildren; as well as daughter in laws, Judy Greig, Pat and Linda Stoddard. She was predeceased by her husband Ray in 2003; son Terry; daughter Shelly Dee; son in-law Dan Baker; and grandson Todd Stoddard. She was also predeceased by her parents Henry and Ivy Walburger; brothers Mick and Ted; and sister Margeria Lemieux.

Reatha was born in Magrath on July 24, 1918 and was the first child of Henry and Ivy Walburger. She was raised in Del Bonita with her siblings Mick, Ted, and Margeria and spent many happy hours playing in the hills, herding the families large sheep herd, and playing with her friends who lived just across the U.S. Border. She also attended school in Del Bonita, Cardston, and Lethbridge.

Reatha married Ray on September 21, 1939 in the Cardston Alberta Temple, and they established their first home in Picture Butte. Further moves took them to Jefferson, Spring Coulee, Cardston, Medicine Hat, and Lethbridge. Reatha was an ambitious, hard worker who loved her garden, yard, and flowers. She always beautified her surroundings wherever she lived. Reatha was involved in her community through service on town council as well as activity in church organizations. She opened “The Owls Nest”, a craft store in Cardston, and enjoyed operating her own business in the community. Her home was always open to friends and family where many delicious meals were served and shared. Ray and Reatha enjoyed time spent traveling both personally and through service in the Cardston Lion’s Club to Japan, Australia, Hawaii and many weekends throughout Montana.

A graveside service will be held on Thursday, January 28th at 11:30 AM in the Cardston Cemetery with Bishop Ryan Anderson of the Magrath 1st Ward officiating. Friends and Family of Reatha are invited to attend the graveside service and join the family to celebrate her life at the Cardston Senior Center (260 -1st street West) following the interment. Condolences may be sent to: www.legacyfuneralhome.ca In lieu of flowers, donations may be made in Reatha’s name to the Canadian Cancer Society, 317- 10th St. South, Lethbridge AB T1J 2M7

One Condolence for “STODDARD Reatha”