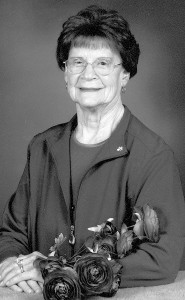 BETH KESLER passed away peacefully at the age of 96 on January 29, 2016 in Raymond, Alberta. Beth was born at Glenwood, Alberta on October 22, 1919 and grew up there. She moved to Raymond with her family and attended her senior year of high school there, before receiving a secretarial certificate from Garbutt Business College in Lethbridge. While living in Raymond she met and married Reg Kesler September 17, 1941. Together they moved to Rosemary, Alberta in 1944 where she worked hard to make the farm and the rodeo business prosper. She became known throughout the community for her caring and giving nature; whenever there was a community or church function she was there, helping out. She held and magnified many callings in the LDS Church there. Beth moved back to Raymond in 1970 where she was again active in church and community. She worked at Southern Breeders in Lethbridge and then in the accounting department for the Town of Raymond for 11 years before retiring. She was an executive officer in the Raymond Hospital Auxiliary and was proud to be a member of the Daughters of Utah pioneers. Beth was predeceased by her parents, Sylvester and Myrtle Williams; Sisters: Hortense Roberts, Mary Maud Williams, Loyia Heggie, Vesta Anderson; Son, Mark Kesler; Daughter, Janet Clifton, and Grandson Jamie Clifton. She will be honoured and sadly missed by her surviving family; Children: Patricia (Gary) Norton, Greg (Judy) Kesler, LeAnne (Keith) Lane, Jeanne (Lee) Cesar, Son-in-law Dale Clifton; 17 grandchildren, 38 great grandchildren, and 16 great great grandchildren. Friends may meet the family at The Raymond Stake Centre, on Thursday, February 4, 2016 from 7:00 – 8:30 pm. A Funeral Service will be held at The Church of Jesus Christ of Latter-day Saints, RAYMOND STAKE CENTRE, 2 North, 200 West, Raymond, on Friday, February 5, 2015 at 11:00 am, with Bishop Craig Palmer officiating. Interment to follow in Temple Hill Cemetery.

One Condolence for “KESLER Beth”