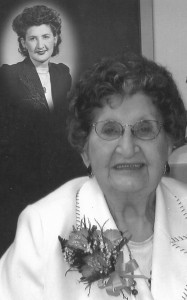 It is with sorrow, but a host of wonderful memories that we mark the passing of our dear mother Edna Milroy!

We celebrate the extraordinary 97 year old journey in the life of our mother, grandmother, great grandmother, sister, aunt, friend and matriarch!

Edna was predeceased by her husband Jock and daughter in law JoAnn Milroy.

Edna was born in Unity, Saskatchewan on October 8, 1918. After she completed her schooling she moved to Lethbridge and eventually put herself through Business School in the evenings, as she worked during the day! She met her husband Jock Milroy from Lethbridge in 1947 and they married shortly after. Edna excelled as a homemaker and enjoyed raising her children and cooking homemade meals for her family. Her baking is still famous in our family! Edna worked in retail sales in Lethbridge for many years and managed dress shops where she formed life long friendships! When Edna was 60 she took up golf and joined the Henderson Lake Golf Club where she enjoyed playing with her friends for 20 plus years! She was active in her church (LDS) and was always helping out in any way she could.

She loved her children unconditionally, taught them gently, gave unceasingly and forgave readily. She will be dearly loved and deeply missed by her family and friends.

In lieu of flowers, memorial donations in Edna’s name may be made to the Alzheimer Society, Alberta and Northwest Territories, 14925-111 Avenue NW, Edmonton, AB T5M 2P6.