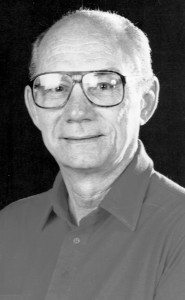 JAMES E, ED, GRAY, formerly of Calgary, passed away in Lethbridge, Feb 10, 2016. Ed was born in Winnipeg Dec, 1930. Ed moved west early in his life and was involved in many sports related endeavours. He met his wife, Amy Pope, in Calgary and they celebrated their 60th wedding anniversary in Nov 2015. Ed loved the outdoors, especially fly fishing and golf. He also skied and hiked in many areas of the Kananaskis and BC. Early in his career, Ed became a golf pro and worked at Earl Grey, Willow Park, and the Calgary Golf and Country Club. He was a devout Christian and served in many capacities including youth activity programs. After retiring, Ed enjoyed fly tying, and well into his 80’s decided to learn computer programming. Ed leaves behind his wife Amy, and many friends, including Cynthia and Ron Langlo. At Ed’s request, no formal service will be held. Donations to the charity of your choice would be greatly appreciated.

One Condolence for “GRAY James”