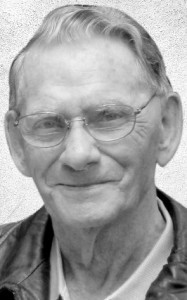 Gerald “Gerry” Scott of Lethbridge passed away peacefully at Carewest Garrison Green in Calgary on October 10, 2015 at the age of 89. Gerry was born in Conquest, Saskatchewan on October 15, 1925 to Iva Marie (nee Clark) and William Wesley “Wes” Scott. He was the eldest of four children.

Gerry was raised in the Iron Springs Area and lived most of his life in Lethbridge. During WW2 as a young teen he helped out on the family farm and this is where he began to develop his many skills in repair, maintenance and woodworking. He married Pauline Bahler in June 1951. After spending a few years in Innisfail, they settled back in Lethbridge in 1954 to raise their three children, Bunny, Larry and Peggy. During those years Gerry worked in the truck transport business often working long strenuous hours to provide for his family.

In 1974 he had an opportunity to work for the City of Lethbridge where he was responsible for maintaining and operating the equipment at Henderson Lake Pool and the Civic Ice Centre. Gerry had a strong work ethic and always took pride in his work. He loved nothing better than making things look like new. When he retired in 1991 he moved to Kimberley, B.C. where he met his second wife Helen Warnock. They married in 1994 and eventually moved back to the Lethbridge area.

Gerry’s passions were woodworking, hiking, camping, repairing cars and talking politics. For many years he was an active participant in the NDP for the riding of Lethbridge. In his retirement years he enjoyed volunteering in the community and at church. He had many fond memories of teaching woodwork to children. He adored his kids and will be remembered as the loving father that he was.

Gerry leaves behind his wife Helen Scott, his two daughters Bunny Scott (Tom Dutton) of Oakville, Ontario and Peggy (George Nemeth) of Calgary; his grandchildren Heidi Dutton (Jonathan Huber), Miles and Isaac, Nathan and Dylan; and one great grand-daughter Sari Huber as well as many extended family, nieces and nephews, and friends.

Gerry was predeceased by his parents Iva and Wes Scott; his brother Clark (Jean) Scott; his sisters Joy (Nick) Taschuk and Elaine (Alan) Heavenor; his son Larry Scott (Char); and the mother of his children Pauline Scott (nee Bahler).

A private family memorial to celebrate Gerry’s life will be held at a later date. Condolences may be forwarded through www.mcinnisandholloway.com. Gerry and his family are grateful for the care he received by the wonderful staff at Edith Cavell and Carewest Garrison Green. A special thank you to Terry Nowlin and Carol-Lyne Carter for the support and compassionate care provided to Gerry in his last years.

One Condolence for “SCOTT Gerald”