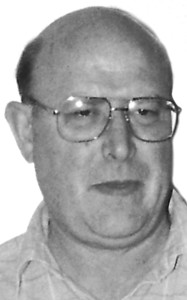 MR. WILLIAM “BILL” HOBERT SHARP, of Lethbridge, beloved brother of Frances Schultz of Lethbridge and Frank Sharp of Lacombe, passed away at the Chinook Regional Hospital, on Friday, February 12, 2016 at the age of 78 years.

He is survived by his sister, Frances Schultz of Lethbridge, his brother Frank (Ollie) Sharp of Lacombe, his sister-in-law Bonnie Sharp of Devon, and was predeceased by his brother Robert Sharp, his brother-in-law Arvid Schultz, and his parents. He is also survived by nieces Linda, Maria, Beth, Patricia, Sandra, Shauna, Shelley, Shannon, and Charlotte as well as nephews Henry and Arthur. He is also survived by numerous cousins and grand nieces and nephews. He will also be missed by long-time friends and lunch-mates Kaz Nakamura and Chris Cook.

Bill was born on September 2, 1937, on the family farm at Bashaw, Alberta. He was the third child of Hobert Rule and Frances Elizabeth (Malott) Sharp. He grew up on the family farm in the George School District community. He spent most of his time roaming through the trees and around the sloughs, looking for wildlife. He was so happy when he discovered some slime molds on one of his forays. He started school at the one-room George school. Once the school bus was introduced, he transferred to the grade school at Mirror Consolidated where he continued until he graduated high school. He always excelled as a student. Following high school he entered the University of Alberta, studying biology. Following graduation, he worked as a lab assistant at the University of Calgary and at a field station at Gorge Creek. He later received a Master’s Degree in Biology. In 1962, he began teaching at the new Lethbridge Junior College. In the late 1960’s he spent a year teaching at a junior high school in London, England. When the University of Lethbridge was established, he became one of the founding faculty members, teaching there until he retired in the late 1990’s.

Throughout his life, Bill enjoyed prowling around the foothills, the coulees, and all of Southern Alberta, identifying and recording the song birds. When they were all recorded, he started on a project to identify and photograph all of the flowering plants of this area. After thousands of photos, he was compiling this detailed information to be published. Sadly he wasn’t quite finished.

A lifelong bachelor, Bill was happy spending hours on his own hiking and enjoying the outdoors. He was one of the founding members of the Lethbridge Naturalists’ Society and served many times on the executive committee.

At Bill’s request no formal funeral service will be held. A memorial gathering will be held at CORNERSTONE FUNERAL HOME, 2800 Mayor Magrath Drive South, Lethbridge, AB, on Saturday, February 20, from 2:00 P.M. to 4:00 P.M. Donations in memory of Bill may be made to the Helen Schuler Nature Centre, 910 – 4th Ave. S. Lethbridge, AB, T1J 0P6.