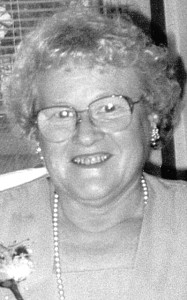 Mary Therese Svab, 84, of Pincher Creek, passed away peacefully on February 13, 2016 at the Pincher Creek Health Centre after a brief illness.

Mary was born May 20, 1931 in Montreal, Quebec to George (Juri) and Anna Gaydos. She moved from Montreal with her mother and brother to Toronto after the sudden passing of her father. There she lived with her family until meeting Mike Svab through the Toronto Slovak community. They were married in Toronto in 1952 and moved to Pincher Creek to start a family.

She was predeceased by her parents and brother Joe, and is survived by her son Joe (Wendy), grandchildren Angela and Michael as well as sisters-in-law Jeannette Gaydos and Pauline Warren and nieces and nephews.

Mary enjoyed many activities including reading, music, singing in the choir at St. Michael’s Church and gardening. In her later years she found joy in watching her grandchildren, Angela and Michael play a variety of sports. Mary had an inquisitive mind, often reading and posing questions to learn more even attending Lethbridge College as an adult. Mary also tutored students at Matthew Halton Community School for many years.

In lieu of flowers, donations may be made to the Windy Slopes Health Foundation, P.O. Box 2554, Pincher Creek, AB T0K 1W0