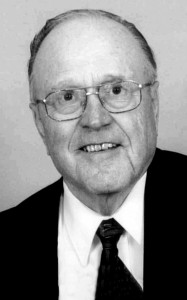 He is predeceased by his parents; siblings Mike, Mary, Kathleen, Steve, Helen and Anna; his infant daughter Anita Kathleen, and granddaughter Melisa Christensen.

John was born October 25th, 1929 in Guernsey, Saskatchewan to Mihaly and Maria (Kerger) Toth. As a youth he moved from Saskatchewan to Diamond City, and then later to Lethbridge where he would meet Zellah and raise their family.

At age 17 John began working on the Canadian Pacific Railroad where he later became known by his peers as the “Velvet Throttle”. He worked for the Railroad until he retired at age 56, having worked for the CPR for 39 years. After his retirement John and Zellah moved to Cardston. They later moved to Coaldale and then recently returned to Cardston where they have lived until his passing.

John was a faithful member of the Church of Jesus Christ of Latter-day Saints. He served in many church positions including as a bishop, a missionary, and mission president of the Hungary, Budapest Mission from 1994-1996. He also enjoyed serving in the temple for 21 years.

John did his best at everything whether it was work, family, or church service. He was outgoing, organized, and dependable. One of his hallmark traits was that he was never late. He was friend to all he met. He loved spending time with his family. He had nicknames for all of his children and grandchildren and they remember fondly how he would make up silly songs. He loved to cook and enjoyed making specialty soups. Being a good provider was important to him. He had special concern for his wife, whom he loved dearly. He always ensured she was taken care of.

The Funeral Service will be held at The Church of Jesus Christ of Latter-day Saints, Temple Street Chapel, on Saturday, February 20th, 2016 at 11:00 a.m. Private family interment to follow in the Cardston Cemetery by invitation only.

One Condolence for “TOTH John”