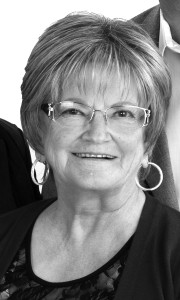 Chloe Galts, beloved wife of Marvin Galts for 53 years, passed away February 18, 2016 at the age of 73 surrounded by her family at Chinook Regional Hospital in Lethbridge.

Born in Lethbridge January 5th, 1943, the second eldest of eight children, Chloe attended her primary school years at Massinisin country school in Milk River County until 1960. In her early teens she met the love of her life Marv Galts. After high school she attended the Garbett Secretarial School in Lethbridge and became the secretary to the President of CIBC Bank. Marrying Marvin September 22, 1962 she joined him on his family farm in Coutts living in a farm house with no bathroom or running water or no phone, but a ‘fabulous out-house’. Brenda was born in 1963, Bruce in 1965. Marvin and Chloe decided to change their destiny and leave the family farm. From 1966-1970 they lived in Montana while Marvin pursued his education and Chloe started her first business – an in home day care – to support the family. By 1971 they had returned to Lethbridge, and the next year would begin the personal and professional journey that is today’s Galko Homes.

She and Marvin where each other’s right hand in every aspect of life. Her dedication to him unwavering, her support unconditional, and her laughter and strength a constant source of inspiration to him. She rode the rollercoaster of their life and business with dedication and celebration. Forever at his side, and he at hers. She truly put him first every day.

Chloe was a leader, a pioneer and an artist. She was a self-taught home designer and interior decorator, developing a large following in Lethbridge of people who came to the annual Parade of Homes every year just to see ‘what Chloe does next’. Under the name of Chloe & Associates, her design company put Galko Homes on the map in Lethbridge winning awards every consecutive year she was at the helm. Chloe is acknowledged for bringing women to the forefront of leadership roles in the construction industry. She changed the face of the Canadian Home Builders Association (CHBA) – Lethbridge by insisting education, board seats and leadership roles were open to women. In true Chloe style she called the wives of builders in Lethbridge and encouraged them to play active roles in construction – to get out from behind the desk and into the field. During the early years of the company she was the Construction Supervisor – in stilettos. The only woman on site. She loved overseeing the projects, negotiating with trades for pricing, ensuring that the quality of a Galko Home was exactly as she thought it should be. She was Marvin’s partner, supporter, challenger and confident in every business they created together. Together they were honoured with the CHBA Legacy Award, and will be honoured by the University of Lethbridge Management Department in April of this year.

Despite her busy trail blazing her children and extended family were her priority every single day. She raised her children, and loved her nieces and nephews, with an open heart, high expectations, unwavering support. She taught them to take care of each other, celebrate anything, laugh every day, and tell a fantastic story. She had a special relationship with her grandson Mike who lived with them while attending university, and her granddaughter Nikki who she encouraged to follow her ‘I’m-possible’ dream. Nikki’s music brought her great comfort in her last hours. She was excited to see what her grandsons Brian and Nathan would accomplish in the years ahead. She expected optimism and resilience no matter what, and was known to say ‘suck it up’ and ‘don’t complain’ when life got tough – as it often did for her. Everyone who knew Chloe knew her stories, and had a story to tell about her – she made sure of it!

Chloe was the epitome was grit, grace and humor– facing prolonged illnesses, personal and business aspirations and trials with determination, optimism, and unwavering faith. When her time came she knew it and she ‘called it’ with as much clarity as she lived her life. When you remember her do it with stories, a smile and smartly dressed (stilettos optional) – she would expect it of us all.

A Memorial Mass will be held at 2:00pm on Wednesday, February 24th at OUR LADY OF THE ASSUMPTION CATHOLIC CHURCH, 2405 12 Ave. S., Lethbridge, AB. A party celebrating Chloe will follow at the Coast Hotel.

Donations in honour of Chloe, and her decades long struggle with Rheumatoid Arthritis, may be made to the National Arthritis Foundation at www.curearthritis.org