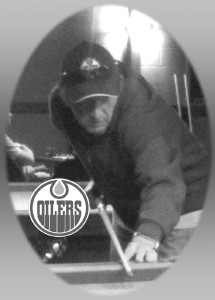 We are very sad to announce the sudden passing of JOHN ELSDEN McCARTNEY.

He lost his battle with pneumonia at the age of 67 years at the Chinook Regional Hospital on Sunday, February 21st, 2016.

Originally from Vernon, BC area, John was an aspiring rodeo champion until he suffered injuries too great to continue. As John recovered he became more involved with the games of pool & snooker. In fact the pool hall became John’s life and home. He has forged many relationships that have lasted decades.

He was a brother and uncle to many and a father figure to some. John is survived by all the lives he has made an impact on, namely his pool family, which are too many to mention.

If you so wish, donations for John’s Service may be made to Cornerstone Funeral Home or Shotz Billiards Club & Lounge.

A Celebration of John’s Life will be held at CORNERSTONE FUNERAL HOME – 2800 Mayor Magrath Drive South, Lethbridge, Alberta on Monday, February 29, 2016 at 1:00 P.M.

Interment to take place in Brocket, Alberta at the Sacred Heart Cemetery.