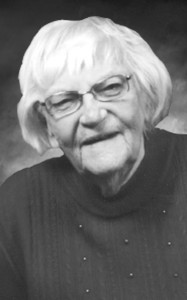 Mrs. Shirley Henley, beloved wife of the late Phillip Henley, passed away suddenly in her home on Monday, March 7, 2016 surrounded by her family, at the age of 85 years.

Shirley worked hard all of her life but still found time to volunteer for the Taber Swim Club, Legion Ladies Auxiliary, Dr. Probe School and Odyssey Childcare. She was an avid reader with a thirst for knowledge who never stopped taking time to learn something new.

Her passion for any and all sports was only surpassed by her love of her grandchildren and great- grandchildren. Grandma Shirley was a well known fixture at ball parks, hockey rinks, libraries, theatre productions, Stampede Wrestling events and any other places that her grandchildren and great-grandchildren wanted to be. Her strength, sense of humor and quiet faith brought her through many difficult times such as caring for her ill mother at a young age, losing two brothers in WWII, raising her two youngest children on her own after being widowed early and the sudden loss of her second oldest son Gordon.

Shirley was an eternal optimist whose warmth, love of life and positive attitude always left you smiling and laughing.

She will always be Great-grandma to Faith and Taylor Henley, Paris, Bree, Gavin and Myla Guenter, Faith and Anna Hubert, Zoe and Ryann Sanderson.