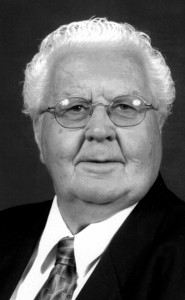 WILLIAM FREDERICK BINNING, beloved husband of the late Rita Binning, passed away peacefully on Thursday March 10th, 2016, at Chinook Regional Hospital at the age of 89.

He is survived by his sister Dorothy Masson, along with sisters-in-law Arlene Litchfield and Ona Dunbrack, and brother-in-law Lauchie (Esther) Champney. He also leaves behind his special friend Ilene Rempel, whom the family is deeply grateful for all the care and friendship offered to Bill.

He was predeceased by his parents, Leonard and May Binning.

Bill was born and raised in Lethbridge. He excelled at sports, and was a particularly talented baseball player. He was employed by the City of Lethbridge as a surveyor for many years. In his spare time, he was in demand as a painter, and at Christmas time he played a GREAT Santa Claus! Bill loved, and was deeply committed to, his family and ALWAYS supported any activity they were involved in. He was happiest when helping others, and loved to volunteer -spending many hours working with the Handicap Riding Association and helping individuals with addictions recovery. He was an active member of the LDS church and served faithfully in many capacities, including a mission with his wife to Salt Lake City in 1989. One of his crowning accomplishments was the many years of successful Father and Son banquets that saw many famous athletes come to town to inspire. In 2002 Bill received the Queen Elizabeth II Golden Jubilee Medal for his years of service.

Funeral service will be held on Friday March 18th at 11am at the CHURCH OF JESUS CHRIST OF LATTER DAY SAINTS, 2410 – 28th Street South, Lethbridge. Friends may meet the family on Thursday March 17th, from 7–8pm at CHRISTENSEN SALMON GENERATIONS funeral home 703 – 13th Street North, Lethbridge, or prior to the service Friday at the church from 10 –10:45am. Interment to follow the service at the Orton Cemetery.

In lieu of flowers, memorial donations may be made to the Canadian Diabetes Association or any deserving charity.