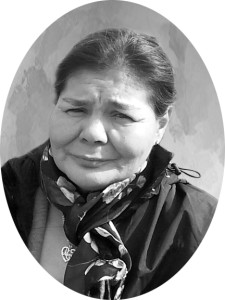 BRENDA RED YOUNG MAN, of Lethbridge, passed away suddenly at home, on Saturday March 12, 2016 at the age of 52 years.

Brenda grew up in various foster homes in her early years. She attended St. Mary’s Boarding School then later went on to Pincher Creek Canyon School to finish up her elementary grades. She went to Piikani School until she married her first husband then lived on the Peigan Reserve. She then moved to Lethbridge, AB where she raised her two older children, Sonny and Christina Red Young Man. Later, she met her second husband and moved her family to the Standoff Reserve where she had Ashley, Amanda and Justin. She eventually moved her family back to Lethbridge where she met the love of her life, Norman Calf Robe. Norman took her children as his own and helped her raise them. Brenda never moved back to the reserve as Lethbridge became her home up until her passing. She loved her children and her family with a big heart. Brenda had a lot of friends in Lethbridge and surrounding areas. She enjoyed laughing and was always joking around with everyone she knew and loved. Brenda was shy and if you knew her, you would see her bashfulness when she had to speak to someone that wasn’t related to her. Her biggest accomplishment was the love for her family; she was very easy to talk to and the one person that we could all be ourselves around. Brenda loved us all unconditionally and had a special bond with each and every one of her family and friends. She will be forever missed and not ever forgotten.

The Funeral Service will be held at ST. CYPERIAN’S ANGLICAN CHURCH, Brocket, AB., on Monday, March 21, 2016 at 11:00 A.M. with Archdeacon Sydney Black officiating.

Interment to follow at the Brocket Cemetery, Brocket, AB.