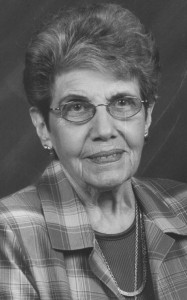 Vi Mueller of Lethbridge, beloved wife of the late Henry Mueller, passed away on Sunday, March 20, 2016 at the age of 93. Vi was born September 24, 1922 in Groton, Alberta; daughter of Orley and Edith Iredale. Vi married Henry Mueller in 1938 and they had two sons Doug and Floyd. Vi and Henry lived in Nemiskam, Alberta from 1947 to 1968 and then lived in Foremost, Alberta from 1968 to 1984. Vi worked as a night telephone operator for AGT and then later at Garnet’s Grocery store. She was a member of the Royal Purple Lodge and really enjoyed being with the ladies. Grandma was a fabulous cook and always shared her homemade mustard with her friends. Grandma moved to Lethbridge in 1984 and has resided at the Good Samaritan West Highland Care Centre for the past six years where she received excellent care.

Vi was predeceased by her husband Henry; granddaughter Laurie Mueller and her sisters Shurli and Myrtle.

Special thanks to the wonderful staff at the Good Samaritan Society West Highland Centre.

A Private Family Service will be held with Canon Allan McCuaig, officiating.