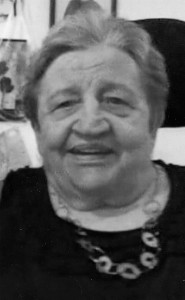 KATHLEEN ROSE RIOUX, beloved wife of the late Terry Rioux, passed away on Tuesday, March 22, 2016 at St. Michael’s at the age of 82 years.

She spent her time enjoying activities in her home at St. Michael’s.

In lieu of flowers, memorial donations may be made to the Alzheimer Society or to the Canadian Diabetes Association.

One Condolence for “RIOUX Kathleen”