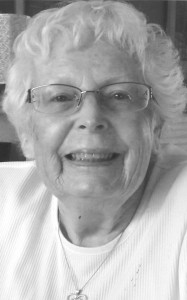 It is with heavy hearts that the family of Shirley Perry, beloved wife of Daniel Perry, announce her passing on March 22, 2016 at Chinook Regional Hospital.

At eight years old Shirley was evacuated out of London with Pam (aged 4); because of the Second World War bombs they spent two years with strangers who took them in. Her schooling was completed in Fulham London, where she also worked in entertainment for 2 years for the troops, and then she became a telephone operator once her schooling was completed.

On a hockey game trip to Nottingham, she was introduced to the love of her life, Daniel W. Perry. They were married October 12, 1957; he was her husband, father of their boys, lover, protector, friend, sweetheart, companion, and her caregiver for 58 years.

Wayne Daniel (Beverly), of Whitecourt was their first child with Dale Martin (Deborah) of Stony Plain coming a year later, both were born in Nottingham, England.

In 1970 they took the big adventure, Dan was offered work in Canada, and the family spent 13 years in Grande Cache, Alberta.

Shirley is also survived by three granddaughters Loni in Edmonton, Ashley (Tyson) in Prince George, and Megan in Whitecourt, as well as step grandchildren Candace (Marc) in Hinton, Steven (Melissa) in Coaldale and four great grandchildren. Also left to mourn are four sisters in law and numerous nieces and nephews in England.

Shirley’s life has always included volunteering, starting in England in 1947 with Mental Health, in order to help with her brother Martin. When they moved to Canada, her life in Grande Cache was filled with running the concession for the boys’ minor hockey, sitting on many Boards, Women’s clubs, and anything to do with youth and education. She also organized shopping trips to Hinton, when prices were too high in Grande Cache. Her Lethbridge volunteering efforts included the Craft Club at the hospital, snuggler of babies at the hospital, and T.O.P.S. Her intentions were always honourable, and it was her desire to make sure all were included in the many causes and activities which she held near and dear.