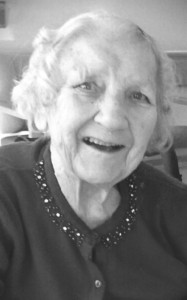 It is with great sadness the family announce that Adeline Schmold, loving wife of Wilhelm, passed away on March 22, 2016 at the age of 86 at the Coaldale Health Centre.

Shew was born in Josephstahl, Ukraine close to Dnipropetrovskvsk, immigrated to Germany first and then to Canada in 1951. She met and married Wilhelm and raised the 3 boys with the help of her mother who lived with the family.

Her greatest joy was her family and she was her happiest when they were all together. Many memories were made around the kitchen table enjoying her labors of love. Her strong faith and love of the Lord carried her through her life and she is now eternally with him.