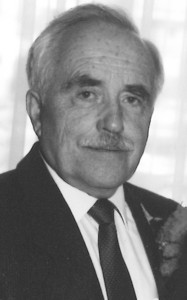 KAZIMIERZ “KAZ” TERAJEWICZ of Lethbridge beloved husband of Barbara Terajewicz, passed away at the Chinook Regional Hospital on Sunday, March 20, 2016 at the age of 100 years.

Kaz was fortunate to be born into a wealthy land baron family and was raised in Chorosowszczyzna, District of Nowogrodek, Poland. He enjoyed a wonderful childhood growing up on the large family farm. With the invasion of Poland by Nazi Germany and the Soviet Union in 1939, he was deported to Siberia to work in a slave labor camp. He was released in 1941 once the allies persuaded the Soviets to free surviving Poles being held in these camps. In 1942, Kaz enlisted with the Polish Army and was stationed in Iran, Palestine, Iraq, Egypt and Italy. He often spoke of their win at one of the most difficult battles at Monte Casino, Italy. At the end of the war, he was sent to Great Britain and served with the Polish Resettlement Corps until honourably discharged. Kaz arrived in Halifax on May 25, 1947. It was there decided that he should make Montreal his home as he spoke some French, having learned it from one of his nannies. However, once on the train, an infamous game of “bridge” was started and Kaz missed the stop in Montreal. He arrived in Lethbridge and for a short time worked on sugar beets. He then worked for the Lethbridge Experimental (Research) Station for approximately 2 years and following that, obtained a position with the P.F.R.A., working on various irrigation construction projects including the St. Mary’s Dam, Waterton Dam, Brooks Aquaduct as well as numerous other smaller projects. Dad worked for the P.F.R.A for 32 years and retired in 1980.

Kaz was very proud of his Polish heritage but he also loved his newly adopted country, Canada. He also loved his family, and probably more than anything he was especially proud of his grandchildren, Matthew and Stephanie. Kaz and Barbara enjoyed travelling and some of their destinations included Italy, Poland, Rhode Island, California and Montana. Most often he enjoyed spending time in our beautiful Rocky Mountains. His hobbies included walking, hiking, fishing, bird hunting, and skiing & curling in his earlier years. Without a doubt, Dad’s favourite hobby was playing bridge. With his talented bridge partners, Dad earned many medals and in the first 33 of his almost 36 years of retirement, you could often find him at the LSCO, playing a great game of bridge!

Kaz was loved by his family and will be dearly missed.

Left to cherish his memory are his daughter Yola (Steve) Gruca and his grandson, Matthew Gruca, all of Lethbridge. Kaz is also survived by his sister Jadwiga Boczkowska of Poland; his sister-in-law Aurelia Kochanek of Rhode Island and numerous nieces & nephews.

Kaz was predeceased by his parents, Wladyslaw and Maria (Ancuta) Terajewicz; brother Leon; sister Wladyslawa and by his granddaughter Stephanie in 2007.