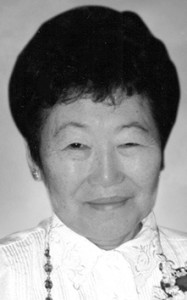 Chiyeko “Chick” Konno (nee Shigehiro) beloved wife of Akira of Calgary, passed away on Saturday, March 26, 2016 at the age of 86 years.

In lieu of flowers, a donation may be made in her name to the Sarcee Hospice 3504 Sarcee Road SW, Calgary, AB. T3E 4T4. Forward condolences through www.mcinnisandholloway.com.