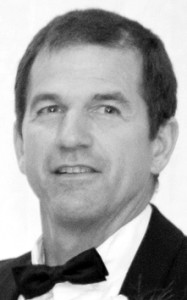 Perry Wayne Luchia passed away unexpectedly but peacefully on Wednesday, March 23rd, 2016 at his home on Buffalo Pound Lake at the age of 57 years. Perry was born on April 26th, 1958 in Lethbridge, AB and was raised on the family farm at Nobleford, AB. Following High School graduation in 1976, he joined the Canadian Armed Forces and trained as a Comm Radar Technician. In 1977, Perry was posted to Moose Jaw, SK. He was selected to the Snowbird Team as a technician for the 1981 and 1982 seasons. This opportunity peaked his interest in flying and the decision was made to apply for pilot training. His application was successful and in 1986, he proudly earned his pilot wings at CFB Moose Jaw. Perry’s first posting was to CFB North Bay at 414 EW Sqn flying the Falcon and Challenger aircrafts. In 1990 he was posted to AETE Cold Lake as their standard’s pilot. In 1994, the decision was made to retire from the Air Force and move east to work as a Production Test Pilot for Bombardier Aerospace in Montreal. Perry flew the Challenger, the Regional Jet but his favourite was the Water Bomber. In his words, it was “real flying” – no bells and whistles. At 40, Perry was diagnosed with Parkinson’s Disease. He continued to fly for a few years before retiring. Perry will be lovingly remembered and missed by his wife of 33 years, Sandra; sons, Kyle and Kurt (Jennifer); daughter, Erin; mother, Lucinda; brother, Kevin; sisters: Wanda, Gwen and Marianne (Jesse); father and mother-in-law, Jerrold and Barbara Delahey; brothers-in-law, David (Karen) and Scott (Lynn); as well as numerous other relatives. The Funeral Service will be held on Tuesday, March 29th, 2016 at 1:00 p.m. in Moose Jaw Funeral Home. Reverend Linda Tomlinson-Seebach will officiate and a private family interment will take place at St. Columba Cemetery. Flowers are gratefully declined. As an expression of sympathy, donations in Perry’s name may be made to the Parkinson Society Saskatchewan, 610 Duchess St, Saskatoon, SK S7K 0R1. Arrangements are entrusted to Moose Jaw Funeral Home, 268 Mulberry Lane. Todd Sjoberg, Funeral Director 306-693-4550 www.moosejawfuneralhome.com.

One Condolence for “LUCHIA Perry”