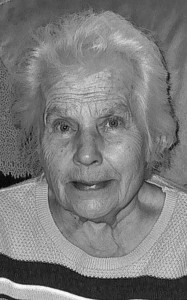 ANNE ALEXANDRA YANICKI, beloved wife of the late Walter George Yanicki passed away at the St. Michael’s Health Centre on Sunday, March 27, 2016 at the age of 90 years.

She is lovingly remembered by her children: Margaret (Patrick) of Toronto, George (Sharon) of Lethbridge, and John (Jane), of Perth, Australia; grandchildren: Greg (Kirsten), Gabriel (Kelly), Sarah (Steve) and Christopher (Victoria); and four great grandchildren: Harrison, Holden, Ryan and Emily. She was predeceased by her parents Hryhory and Kataryna Romanow, her husband Walter, and brother Michael.

Anne grew up in Saskatoon, where she attended the Saskatoon Technical Institute. She married Walter in Watson Lake, Yukon (1950); she lived many years in Saskatoon, and spent her later years in Lethbridge. Anne was a dedicated secretary and an avid volunteer. She loved sharing her Ukrainian culture with others including: writing pysanka, preparing traditional foods, and actively participating in her church. She had a tenacious spirit, a twinkle in her eye, and a love of the outdoors, her family, and life. She will be dearly missed by all those whose lives she touched. Special thanks to the staff at St. Michael’s Health Care Centre for many years of attentive care for Anne.

A Memorial Mass will be held at Ss. PETER AND PAUL UKRANIAN GREEK CATHOLIC CHURCH, 643-12 B. Street North, Lethbridge on Saturday, April 2, 2016 at 10:00 am with Reverend Gary Sedgwick Celebrant. A prayer service and interment will follow in Saskatoon (TBA).

Anne loved walking; in lieu of flowers enjoy a walk in Anne’s memory. “We are all just walking each other home” (Ram Dass). Donations may also be made to the Alzheimer Society, #402 740 – 4th Ave. South, Lethbridge, AB T1J 0N9.