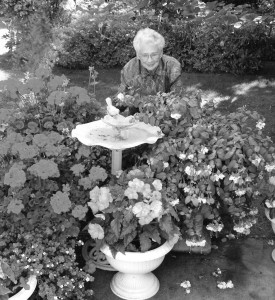 Mabel passed away peacefully on Saturday, March 26, 2016 at the age of 97. Great-great- grandmother Mabel was raised near Prince Albert, Saskatchewan surviving the depression and developing her strong and positive attitude toward life. Mabel married and she and Harold settled in Burnaby, BC where they tended their large yard, garden, and hanging-flower baskets. Mabel was a great cook and filled the stomachs of her friends and family, often serving her special prime rib dinner. For the last four years, she resided in Lethbridge at AgeCare Columbia where she enjoyed the company of the kind and caring staff. Mabel counted her blessings every day and often commented that “life is good”. We would like to thank the staff at Columbia, the VON, and CRH for their care and concern for Mabel during her last years.

Mabel was predeceased by her husband Harold. They had been married over 50 years. She is survived by her sister Marie Wheeler of Nanaimo BC, her daughter Lorraine Russell (Ron) her granddaughter Robyn Russell (James), her grandson John Russell (Nancy) and great granddaughter Carlee Heerschop and her son Payton, and great grandson Rory Russell. She is also survived by her niece Sharon Luttrell and her family. She was predeceased by her brother-in-law Harold Wheeler who was a great support to her after her husband passed away.

A special thanks to all those friends who helped Mabel especially Joan and Roy Stevenson and family, Sharon and Ted Rattenberry, Marianne and Norm Grosser, Millie Chow and Chris Morris.

In lieu of flowers or donations, we would ask that, to honour Mabel, you plant some flowers or a cherry tree.

A celebration of her life will be held in the Raymond United Church, Raymond, Alberta on Saturday, April 9, 2016 at noon with lunch to follow.